One of the most common types of making coffee is in a coffee machine or Turk. Many inhabitants of the house have a Turk, as coffee machines are quite expensive and not everyone can buy it. In addition, many people prefer to brew coffee in a Turk, as it turns out to be “alive”, and in a machine – “mechanical”. 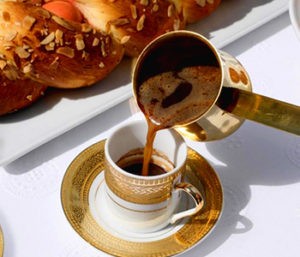 Also, coffee lovers note that coffee in a Turk can have a lot of flavoring shades depending on the type of Turk, the recipe for cooking and little secrets. Many factors influence coffee brewing in a Turk.

Of course, this is the cooking temperature, the material of the Turks, grinding, the addition of spices and sugar. It should be noted that the taste of coffee directly depends on how well you gave coffee oils the opportunity to open up.

Oils affect the taste buds and prepare them for the perception of coffee. If the foam is not preserved, this can lead to undesirable consequences, since the decomposition of coffee oils can lead to bitterness.

The choice of the Turks

To make coffee in a Turk, you must first purchase it. If you have one, you may not read this section. So.

Which Turks can be considered. Ceramic Turks: these are porcelain or clay. What is their advantage. They have a high heat capacity. That is, they slowly give off heat. This means that coffee in such Turks will be prepared slowly and boil well.

In addition, when you remove such a Turk from the stove, due to the long-term preservation of high temperature, the cooking process will continue. 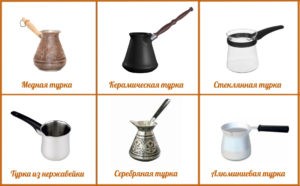 The disadvantage of such a Turk is fragility. If you want a light drink, it is better to choose the Turks of the copper group, made from copper. Thus, using the material of the Turks, you can adjust the strength of the drink. To save oil, that is, foam, you should choose high Turks. In them, the boiling process occurs more slowly and therefore it is difficult to miss the boiling point.

There are also quartz Turks on the market. Their difference lies in the fact that they have a transparent body, which will facilitate control of the boiling process, and in terms of heat capacity they are close to ceramic. 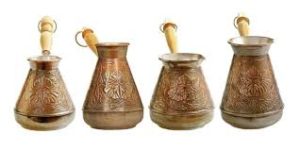 Why chooses a copper Turk

Most coffee lovers buy Turks precisely from copper. This is not a fad. The thing is that these Turks have passed the test of time. For example, the world champion in brewing coffee in cezve, Vadim Granovky, believes that copper is the best material for a Turk.

Copper evenly distributes the temperature over the entire area, that is, the drink does not burn. However, when buying a copper Turk, you need to pay attention – it is soldered or solid, that is, made of one sheet of copper or several parts.

Why is it important. Because in brazed Turks, it is at the place of soldering that your coffee will burn, since at this point there will be the highest temperature. V.Granovsky is extremely skeptical of the Turks made of stainless steel or aluminum, as coffee burns in such Turks, and therefore is always bitter.

Clay or ceramic Turks are sometimes let down, because when a ceramic Turk is removed from the fire, the process in it continues and very often the coffee “escapes”. In a good Turk, the bottom should be wide and the neck narrow, on the contrary.

In this case, the aromatic substances do not evaporate, and oxygen does not penetrate the drink, thereby we get a very slow and delicate saturation of water with oils from ground coffee. It is also worth paying attention to the material of the Turkish pen.

If the fire reaches the handle, then the plastic will burn, the tree will burn, and the bronze will simply heat up. When choosing a copper turk, pay special attention to the fact that inside it must be covered with a protective layer. If copper reacts with acids, copper oxide is produced, which is toxic.

Therefore, utensils for making coffee must necessarily be covered either with silver or with tin – be tinned. Tin is cheaper, but unlike silver, it wears out quickly and once a year such a Turk needs to be tinned again.

After you have chosen a Turk, we proceed to brewing coffee in a Turk. We proceed from the classical Turkish – copper. 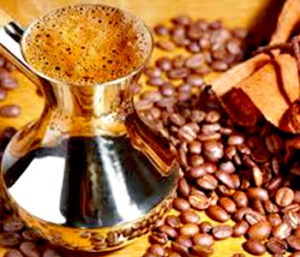 Pour two full tablespoons of coffee into a copper Turk set on fire. Let the turk warm with ground coffee. You can stir a little coffee in the Turk, so that it evenly warms up. When you smell coffee, you can add water. It is better to pour water in a thin stream so as not to stir coffee later.

Thus, in the process of preparation, we will not interfere with coffee. While our coffee is brewing, we take a mug and put it next to burning comfort, but not for comfort.

After that, take finely ground cinnamon and pour into an empty cup to taste. The main task is to prevent cinnamon from burning. Given the high temperature, an empty mug of cinnamon must be turned. We wait until the coffee begins to boil.

The most important thing is not to miss the moment of intense boiling. When the foam begins to rise, take a spoon and stir coffee in the Turk. Remove from the stove. We let the brewed coffee stand for two minutes, so that the coffee that was raised with stirring settles.

After the coffee has brewed, we do as follows – remove all debris from the top side. Next, take a Turk and pour it into a warm cup with warmed cinnamon in a thin stream. After that, add milk or cream to taste. 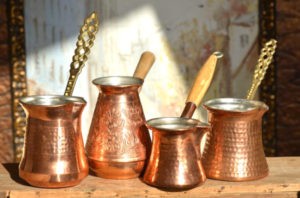 To make coffee with foam, it is necessary to brew as follows. We take coffee beans and grind them before brewing in a fine grinding. The grinding should be fine, since most ground coffee is suitable for coffee machines, but not Turks.

Thus, you may lose the taste of coffee. Cook in two cups. Pour water into the Turku in two cups. After you ground the coffee, take two full spoons and put in a Turku with water. Add two teaspoons of sugar.

Many people prefer Turkish coffee without sugar, but sugar will give the coffee a beautiful rich froth. After all the ingredients are added, put the Turk on a small fire. We don’t interfere with anything in Turk.

The fire is small, because if it is medium or large, the coffee will boil quickly and will not have time to reveal all its taste. Turkish coffee should not be boiled in any case. When you see that the water becomes a little foamy, but does not boil, you leave the Turk on the table and hold for a minute. 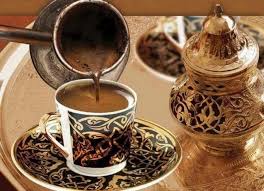 Then again to a small fire. When the water begins to boil, set aside again and wait a minute. Then put the last time on the fire and stir. When the foam builds up, you remove the Turk from the gas and your coffee is ready. If you did everything right, then when the coffee is poured into a cup, a dense brownish foam will form on top, which will give your drink elegance and additional appeal.

To make coffee in Turk, we certainly recommend you Lavazza coffee – the world leader in the production of ground coffee and coffee beans.