When you are a wealthy person and can afford everything, it is difficult to surprise you with something. But still there are exceptions. Here the question is not so much in money, but in the availability of such a product.

And if the general public knows the fact of the production of one of the most expensive coffee itself through the collection of grains from the waste products of musan animals in Indonesia, then the coffee we want to tell you about is not only the most expensive in the world, but also exclusive. It is mined in very small quantities.

We bring to your attention coffee – Black Ivory Coffee, the cost of which per kilogram reaches up to 1800 US dollars. The name is translated into Russian as – black elephant tusk coffee.

There is very little data about this coffee and, to write this article, we collected information bit by bit. Black Ivory coffee is produced in the same village of Ban Taklang, Surin in northern Thailand. The villagers rise to the highlands of the Thai mountains to a height of 1,500 m, where they collect the best varieties of arabica.

At this height, there is a lot of sun and few pests that spoil the plants. Therefore, it is believed that the best arabica varieties grow on highlands above 1000 meters, and the higher the height, the better and more expensive the product.

After the harvest, coffee beans are brought to the village, where local residents, who have been specializing in elephant care all their lives, participate in the further process.

Coffee beans are mixed in the form of mashed potatoes with your favorite animal treats. It should be noted that for each elephant, food is prepared separately according to an individual recipe according to its taste preferences. After grains are absorbed, the digestion process begins, which can last up to three days. 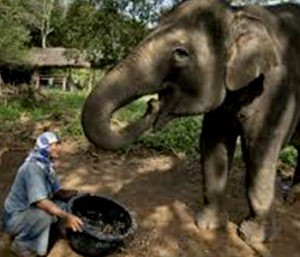 Numerous studies by a doctor from the University of Guelph – Marcone show that elephant enzymes, during digestion, destroy coffee bean protein. Since protein is one of the main factors causing bitterness in coffee, you will hardly feel it in Black Ivory. In addition, unlike carnivores, herbivores such as elephants use much more fermentation for digestion. Therefore, coffee beans in the process of being in the stomach are saturated with flavoring aromas of fruit pulp.

Caffeine in coffee does not harm elephants. In high-quality arabica coffee, caffeine is practically absent. In addition, the structure of the beans is such that coffee oils do not go beyond it. Heat is required to extract caffeine. That’s why coffee is roasted at a temperature of about 200 ° C and brewed at 93 ° C. During the production process, a veterinarian is at the elephant’s site all day. 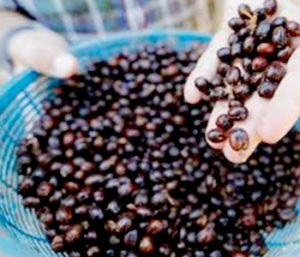 After over-etching, the grains come out naturally with elephant excrement. They are collected, thoroughly drained and washed. The whole process is mainly manual. About 10,000 beans are harvested per kilogram of roasted coffee. Thus, 33 kilograms of coffee bean is required to produce just one kilogram of Black Ivory black coffee.

The coffee brewing process is also special. Experts say that for this you need to use a special Austrian siphon of the twentieth century. Only such tea leaves, which lasts about 5 minutes, conveys the whole diversity of Black Ivory taste. 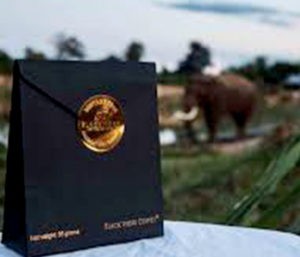 The offer on the market of this coffee is small, it is influenced by such reasons as the presence of high-quality arabica, the appetite of elephants, the amount of destruction of beans during the chewing of elephants, the ability of local residents to select beans manually, and the yield of coffee trees.

Local residents are confident that such nuances will always affect the relatively small volumes of Black Ivory coffee production.

For example, in 2012, only 50 kg of Black Ivory coffee was produced and available on the market.

Therefore, this coffee – Black Ivory – you can see only in a few five-star hotels in Thailand, the Maldives, Brunei, in which representatives of the royal dynasties, sheikhs and members of the richest and most influential families of the planet like to relax.