Properties of coffee. Want to be rich?

The title of the article is not an advertising slogan or a desire to draw your attention to this article. An analysis of some scientific factors that we studied while working with coffee prompted the writing of this article. The information presented here is not a figment of our fantasies, but is taken from open sources and scientific literature that you yourself will be able to get acquainted with a little effort and perseverance.

So, in this article we will focus on an integral and one of the main elements of coffee – caffeine.

Many scientists have known about the benefits of coffee for a long time, since caffeine was isolated from coffee beans in 1820. Since then, its unusual influence on the human psyche has attracted not only scientists, but also entrepreneurs. If the interest of scientists was understandable – research goals, then businessmen tried in every possible way to increase the efficiency of their employees without using additional financial costs.

In some countries, the use of coffee as a stimulant for economic growth has been proclaimed a national policy. The fact is that caffeine has a positive effect on the receptors of the brain and the human body, depending on the dosage taken. Therefore, such countries as Japan and the United States acquire about 80% of the highest varieties of arabica, which grow at an altitude of more than 1200 m. 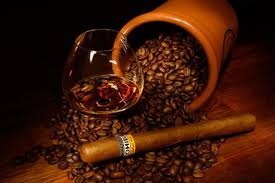 Such arabica varieties contain up to 1% caffeine. Now let’s look at the ratio of purchases by some countries of the highest grade Arabica coffee with caffeine levels of up to 1% and their GDP. The United States and Japan together account for more than 20% of global GDP and buy up to 80% of the premium coffee.

In addition, an average of 20% of the total population of the planet who have very developed taste buds and can easily distinguish between high-grade coffee varieties – have an IQ of more than 110 units. And what is surprising, it is 20% of people with IQ more than 110 units. control 80% of the world’s financial assets. As you probably already noticed, the pattern is straightforward.

Caffeine itself is a drug, and when consumed heavily, the body perceives such a situation as poisoning. The hormone cortisol begins to stand out, which activates the body’s struggle. It is at this moment that you feel a strong heartbeat, increased pressure, activity. However, this condition quickly passes and the person feels a breakdown.

It is very important to drink coffee with a caffeine capacity of up to 1%. This ratio of caffeine to coffee just contributes to the release of serotonin – the hormone of joy. Very interesting studies were conducted on mice. The effect is extremely unusual. Studies have shown that a certain dose of caffeine has led to a significant increase in serotonin (the hormone of happiness).

In addition, receptors were actively built – protein structures on the surface of nerve cells in the brain. Nicotinic, muscarinic receptors, GABA receptors, serotonin receptors – receptors were built on almost all major neurotransmitters. This means that the brain cells have renewed, improved their qualities. Under the influence of caffeine, working memory improves, that is, the memory when you need to remember what is happening now.

Studies were conducted on three groups of people. The first received a placebo (an empty capsule with an imaginary medicine), the second caffeine, the third caffeine plus glucose. All of them were given the opportunity to solve various problems and tests. The best results were shown by the caffeine plus glucose group.

How does caffeine work? The first is increasing pressure. It will help one person, harm another. An effective dosage to increase pressure is approximately 3 mg per 1 kg of body weight. There are many research data that have proven the effect of caffeine on hormones: adenosine, testosterone, adrenaline, cortisol.

Adrenaline under the influence of caffeine increases by 40-50% in older people, there is also evidence that caffeine is even more active on the body of a young person, that is, 500% when caffeine is consumed 6-7 mg / kg of body weight.

Cortisol. Cortisol is extremely beneficial during hunger and is harmful in everyday life. It destroys muscles and promotes fat accumulation. During physical exercise, caffeine causes a large burst of cortisol and a small burst of intellectual activity.

Adenosine. Adenosine is included in the work of our body when a person begins to get tired or overwork. Its manifestations are drowsiness, the desire to do nothing, lie on the couch, etc. In this case, caffeine is an antagonist of adenosine, that is, it does not allow the body to include adenosine. Due to this, fatigue appears later, it is caffeine that works better when a person is already tired, than a person is alert.

Fatigue. Research was carried out on cyclists. Two groups were taken. One was given a placebo, an arc of caffeine. Groups were tested for various bike rides. The group that received caffeine was tired 5% less than the other group.

Dependence. Caffeine with prolonged use can be addictive, but not significant. Its effects can be observed for several days. A person who often drank coffee, and then refused, complains of drowsiness, difficulty concentrating. This is due to the fact that adenosine is constantly stimulated, which should turn on when a person is very tired. Because of this, all biorhythms get lost. But after taking caffeine, adenosine restores its work within a few days.

Caffeine is a simple and affordable stimulant. You can take it when you need to, as it begins to act in 10-40 minutes. To pump the brain, improve RAM, it is advisable to combine caffeine with something sweet, where there is glucose. This combination is most optimal for the development and stimulation of your brain.

When the brain works more actively, its activity lasts longer, RAM improves, then your performance increases. As a result, you become more competitive, your decisions more accurate and balanced. All this makes you successful and, as a result, more affluent – as owners of this property.